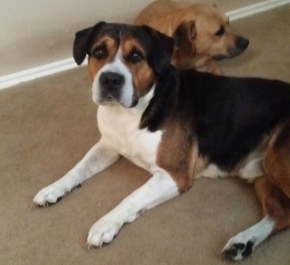 Yesterday evening, as I watched Hunter beam with excitement while racking up tickets at Chuck E. Cheese, I couldn’t help but to feel concern for the mental state of my pet, Dominoe.  The video game music and kid commotion weren’t loud enough to obscure the powerful thunder rattling the arcade’s windows around 8PM.  From having to repair my fence fiftyleven times, it was clear this was the type of weather capable of spooking Dominoe into charging through double sided cedar to escape the backyard.  I was in no mood to return to Home Depot yet again as a consequence of my dog’s seemingly irrational fear of storms. So once Hunter finally settled on a slinky for his hard earned tickets, it was out into the elements to try to ward off Dominoe’s inevitable El Chapo caper.

Luckily, I made it home before the worst of the flooding that sunk Northwest Harris County.  After whistling from my backdoor, I was relieved to see Dominoe, Paris, and Cud Kitty all emerge from the larger of the two dog houses in my yard.  I kissed all their noses and fetched a towel to dry them off.  As Paris and Cud Kitty plopped down on the living room floor, Dominoe continued to pace the house looking for a safe place to hide from Mother Nature’s threatening demeanor.  He finally settled right next to me on the couch and dropped his head in my lap.  At eighty pounds, Dominoe is well aware he is no longer a lap dog; however, he puppy eyed me into submission.  He then nudged my right arm with his snout to encourage me to comfort him.  I noticed he was trembling with anxiety.

Now, this is the very same dog who puts the fear of God into any living thing that unsuspectingly approaches my fence.  Yet, for the last ten years I’ve struggled to understand why Dominoe is so perplexingly frightened by something as common as thunder and lightening.  I felt his ancient ancestors would be ashamed to see how far their canine descendent had fallen from his natural place in the wild.  I’m guilty of pup shaming him: “C’mon Dominoe, you can’t be scared of the weather, you’re a dog!”

But last night, as I ran my fingernails through his coat, I played a game with myself – how would I view the universe from Dominoe’s perspective?  I’ve known Dominoe since he was in his mother, Cheecago’s, womb.  I authorized Cheecago’s life saving cesarian when Dominoe’s colossal head clogged up her birth canal.  When he finally opened his eyes after two weeks of suckling, I was the first human he saw.  If anyone was qualified to psychoanalyze Dominoe, it was me.  So I walked through his formative years in my mind to see if I could find a moment that could explain his wimpy storm behavior.

And then it finally dawned on me; there was a critical night back when Dominoe was a year old that I was absent.  My clothing line, dangerousNEGRO, was just getting off the ground, so my partners and I decided to rent a booth at the Indianapolis Black Expo.  At the time, I was dating a TSU girl with roots in Dayton, Ohio, just a ninety minute drive from Nap.  She mentioned her grandmother would love to have the dogs frolic in her backyard while I was in Indianapolis slangin’ t-shirts.  Seizing the convenience of free dog care, I dropped Cheecago and her puppy Dominoe off at Grandma Linda’s before heading to Indy (I had originally given Paris to one of my fraternity brothers in Chattanooga, so she was not present).

Sixteen hours later, I received a frantic call from Grandma Linda explaining that she had called the dogs to come inside after hearing thunder from an approaching storm. Dominoe answered her call, but surprisingly, Cheecago was nowhere to be found.  This was highly unusual because 1) Cheecago and Dominoe were practically inseparable, never going beyond eyesight of each other 2) Cheecago never showed interest in running away and 3) there were no visible holes in the chain linked fence from which Cheecago, a stubby, overweight, brindle pit could escape.  I hightailed it back to Ohio, and while en route, I received a call from the Trotwood Police Department.  Cheecago had been found… dead… two miles from Grandma Linda’s house. I showed up to the scene with my girlfriend’s father and Dominoe.  Cheecago lay on the sidewalk, mortally wounded. It was unclear how Cheecago had met her demise; her chest was blown open from what appeared to be a shotgun wound.  The police said there were no reports of a driver hitting her and there was no blood trail in the street to indicate that was the case.  I called my mom to break the news and she thought it would be best for Dominoe to see Cheecago one last time for closure.  (Yes, that may sound crazy to non dog owners, however, from previous experience we knew how difficult it was to have a dog grieve over a loved one that mysteriously never came home after “taking a ride to the vet”).  I let Dominoe out of the car to show him that his mother was deceased.  He wimpered and howled in despair… loudly.

Psychology Today recently published an article titled “Unconscious Memories Hide in the Brain But Can Be Retrieved.”  In the article, researchers revealed that “inadvertent or unexpected stimuli linked to the state-dependent memory can trigger acute flashbacks that are often the hallmark of post-traumatic stress disorder (PTSD).” This is the case for people as well as animals.  Traumatic events create neurological pathways and synaptic bridges that affect the decision making of rats, humans, and everything in between.  So it is not far fetched to conclude that Dominoe associates thunder with the frightening moment that precipitated his mother’s death.  It was the worst night of his life.

Now consider your own traumatic memories. Whether you realize it or not, they play a role in your current decision making. Dominoe has a max IQ of 8; traumatic memories manifest in much more complex ways in humans. Take that into consideration before shaming yourself and others for actions that seem unreasonable.  Don’t be afraid to see a professional or encourage others to do so.  I tried it simply as a formality for a lawsuit I considered filing against HPD (they negligently fired a bullet into my kitchen eight years ago… trying to shoot a dog).  Surprisingly, I discovered more about myself than I ever would have imagined.  I came away from the experience feeling like I could conquer the world.  So, keep it real with yourself; mental health is as critical as physical health.  Please don’t be afraid to weather your storm.